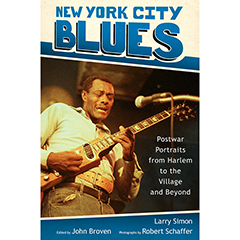 Postwar Portraits from Harlem to the Village and Beyond

A first-ever book on the subject, New York City Blues: Postwar Portraits from Harlem to the Village and Beyond offers a deep dive into the blues venues and performers in the city from the 1940s through the 1990s. Interviews recall the daily and performing lives of working musicians, songwriters, and producers. The interviewers capture their voices—many sadly deceased—and reveal the changes in styles, the connections between performers, and the evolution of New York blues.

New York City Blues is an oral history conveyed through the words of the performers themselves and through the photographs of Robert Schaf­fer, supplemented by the input of Val Wilmer, Paul Harris, and Richard Tapp. The book also features the work of award-winning author and blues scholar John Broven. Along with writing a history of New York blues for the introduction, Broven contributes interviews with Rose Marie McCoy, "Doc" Pomus, Billy Butler, and Billy Bland. Some of the artists interviewed by Larry Simon include Paul Oscher, John Hammond Jr., Rosco Gordon, Larry Dale, Bob Gaddy, "Wild" Jimmy Spruill, and Bobby Robinson. Also featured are over 60 photographs, including those by respected photog­raphers Anton Mikofsky, Wilmer, and Harris, that provide a vivid visual history of the music and the times from Harlem to Greenwich Village and neighboring areas.

New York City Blues delivers an in-depth introduction to the rich variety, sounds, and styles that made up the often-overlooked New York City blues scene.

Larry Simon is a Brooklyn-born guitarist and composer who has recorded and toured with many of today's leading jazz and blues artists, including those interviewed in this book. John Broven is an original Blues Unlimited writer and author of Rhythm and Blues in New Orleans; South to Louisi­ana: The Music of the Cajun Bayous; and Record Makers and Breakers. Robert Schaffer is a photographer and writer whose images have appeared in Time Out and the Japanese edition of Cosmopolitan.