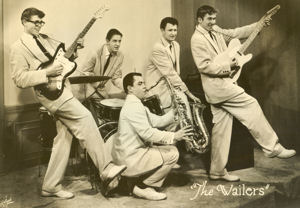 Following referrals from local composer Art Mineo and Mills Music, Golden Crest’s Clark Galehouse recorded the Wailers after a dance in Tacoma during a visit to the Seattle area in early 1959. In late June 1959, the timeless “Tall Cool One” reached No.36 on the Billboard Hot 100 during a 13-week stay (No. 45 Cash Box); along the way the record brushed Billboard’s R&B chart at No.24. A high point was an appearance on Dick Clark’s nationally networked “American Bandstand.” The follow-up “Mau-Mau,” from the same session, was a jazzier instrumental with a strong dash of the Champs’ “Tequila” that peaked at a relatively disappointing No.68. By common consensus, the flip “Dirty Robber,” a screaming Little Richard-type rocker by Kent Morrill, should have been the “A” side.

In June 1959, the Wailers made the coast-to-coast trip in a Pontiac Fury station wagon to record at Golden Crest’s Huntington Station studio. The sessions over three days led to the “Fabulous Wailers” LP, with its evocative cover photograph, at the end of 1959. Johnny Greek was prepared to leave home for New York to make music a full-time career but the rest of the Wailers would not give the same commitment. Without the band’s full support, Galehouse did not take up the contract option.

The Wailers continued their recording career by setting up Etiquette Records, directed by Buck Ormsby, formerly with Top 100 act Little Bill and the Bluenotes. With singer Rockin’ Robin Roberts, the Wailers (now without Johnny Greek) famously rearranged Richard Berry’s “Louie Louie” only to see eternal fame snatched from them by the Kingsmen.

In a quiet moment, when the Beatles were overrunning America in 1964, Galehouse postulated that the Wailers could have been the American equivalent of the Liverpool mop-tops. “Tall Cool One” was reissued at the time and made No. 38 on Billboard (No. 50 Cash Box). In his book, “Sonic Boom: The History of Northwest Rock,” Peter Blecha wrote: “The Wailers simply had a rock ‘n’ roll sound like nothing else around – and bands in the Northwest, across the country, and even in England loved them.” He quoted the Beatles’ George Harrison as having the LP “since day one.” Certainly, the Wailers’ influence on the Northwest scene, surf music, garage rock and beyond is incontestable. Adapted from my notes to the Ace double-CD, “The Best of Golden Crest.”

There is a chapter devoted to Golden Crest Records and the Shelley Products pressing plant in my book “Record Makers and Breakers”.

Listen to the Wailers here!
“Tall Cool One”
“Mau-Mau”